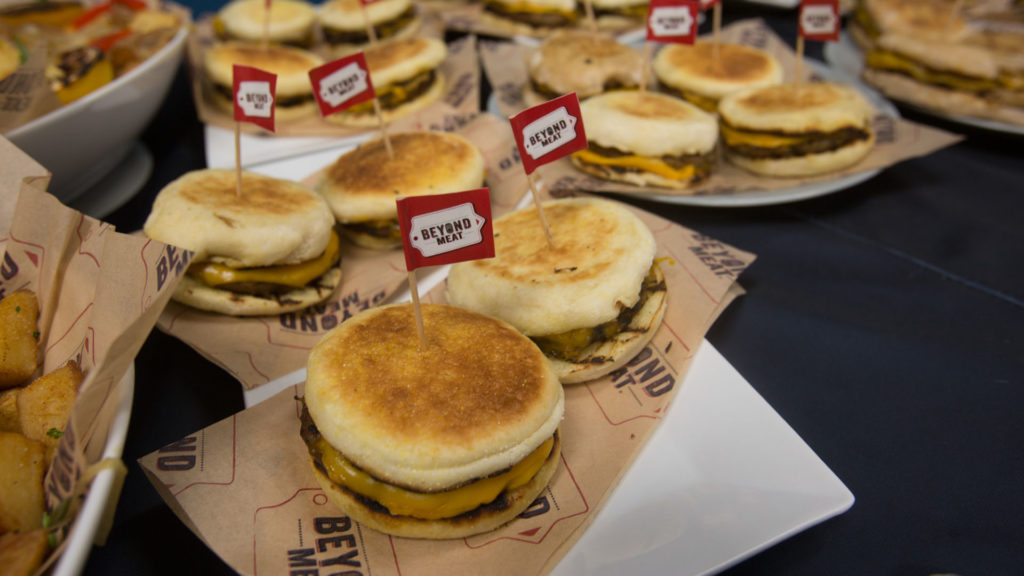 Earlier this year, we noted in social media and the news an uptick in discussions around veganism and the launch of new vegan products, specifically among fast food restaurants in the US. Many were predicting 2019 would be crowned “The Year of the Vegan.” Carl’s Jr. in particular took to Twitter to drum up buzz around its upcoming vegan menu at the turn of the new year. The launch was a partnership with popular vegan burger company Beyond Meat.

Buzz around veganism had been quietly growing. There has been a definitive spike of interest in veganism and meatless lifestyles, made popular in part due to the topic’s popularity among US celebrities, and increasing reports about the damaging impact meat production is having on the environment.

According to Gizmodo, “in the past week alone, Del Taco debuted its Beyond Meat taco and Burger King announced it would expand its Impossible Whopper to every location by the end of the year.”

The team at Impossible Foods, creator of the famous Impossible Burger and now the Impossible Whopper, benefitted from this trend as they expanded quickly across the US. The team had been using Meltwater to track food-related trends and better understand individual market trends, since they launched and (very quickly) scaled to stores and new products across the country.

This week, Beyond Meat, LA-based meat substitute company and creator of the Beyond Burger, interrupted the steady stream of tech IPOs to make its formal debut in public markets.

The non-tech unicorn to watch

While all eyes have been on Lyft, Uber, Slack, Pinterest and more as we continue to see an explosive year in tech IPOs, we should also be looking closely at Beyond Meat’s debut. The IPO is priced priced between $23 and $25 per share, up from $19 and $21 per share, giving the company a market value of $1.49 billion, up from $1.21 billion earlier, according to Reuters. It’s looking to raise upwards of $240 million.

“Beyond Meat’s net loss narrowed marginally to $29.89 million in the year ended Dec. 31, from $30.38 million a year earlier. Net revenue more than doubled to $87.93 million in the same period,” Reuters reports.

As the meatless burger hits the markets, we took a deep dive into Beyond Meat’s growth across a number of alternative datasets over the last year.

The team jumped from no spend on Google AdWords to a steady stream of $15k in late 2018, scaling up from $12k in October. This indicates they were steadily building on related keywords leading up to their announcement.

An important indicator of a brand’s reach and popularity among other players in its ecosystem, backlinks for Beyond Meat have been steadily rising over the last year.

The brand’s presence in popular searches has also steadily increased – an indication of rising brand awareness, recognition and popularity.

Job listings are indicative of a brand’s strategy and where it’s investing in human resources. For Beyond Meat, there’s a strong focus on marketing (not surprising given its IPO) but also on innovation. This includes key titles like Extrusion Expert, Innovation Scientist, Food Technician and more – indicating a strong focus on R&D for new products. As well, the team is hiring sales managers in Europe and Canada, indicating intent to expand geographically.

As the Beyond Burger and Beyond Meat have grown in popularity, and its customer base expanded, sentiment on social media remains positive. This indicates strong customer satisfaction.

Investors and stakeholders can look to online data around Beyond Meat closely for signals, or predictive indicators, about the company’s events and advancements. They can also observe the readiness of the wider ecosystem as the brand enters public markets.

Looking to observe more company signals from external data in real time? Contact an expert from Outside Insight to learn more about how you can leverage insights from online data for your business.